Do you know Saifullah? I think you don’t know Saifullah. Saifullah has cleared the latest UPSC exams 2019 and has got 623rd rank in AIR and this rank he made in his ever first attempt.

Let’s see his brief biography in this short article. 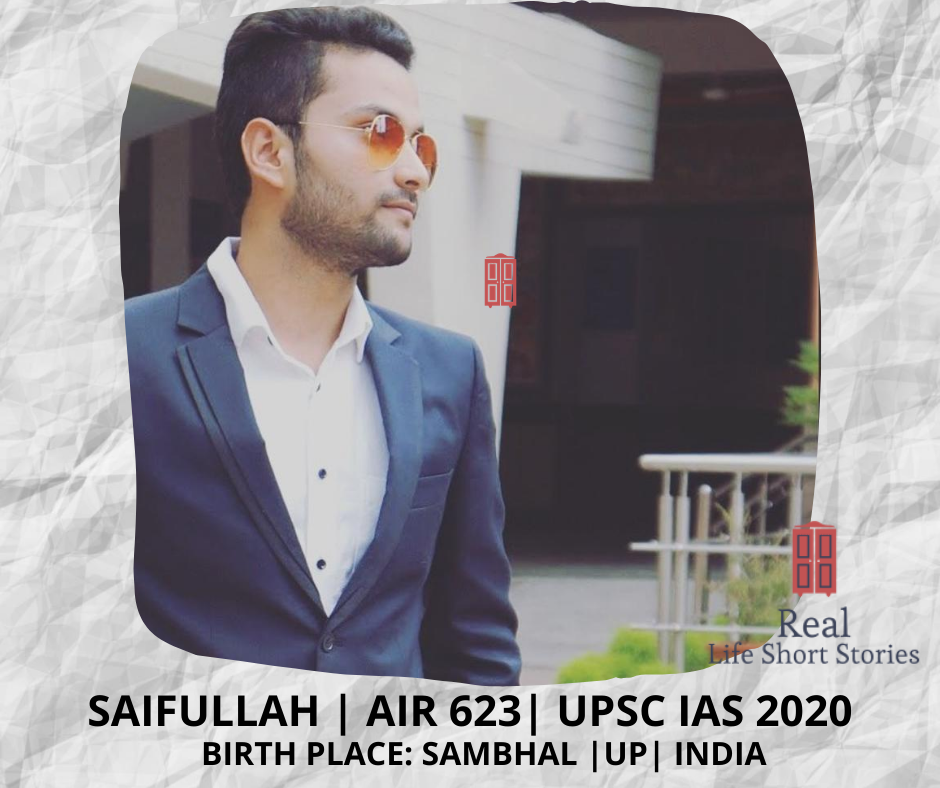 Saifullah belongs to Sambhal. (Sambhal is a small but historical town in Uttar Pradesh.)

There are four persons in his family, including him. His mother is a housewife while his father is a lawyer, and his brother is a CA. Thus you can see clearly, that his family would support him in giving him an atmosphere of study and encouraged him.

Saifullah completed his graduation from Jamia in 2017. Recently he is pursuing LLB. He started his preparation for UPSC in 2018 and joined coaching classes in Jamia Millia Islamia University Delhi.

Saifullah tried his best and cracked the prelims exam. But first, he didn’t believe in it and lose hope and said to himself, ”The mains are very difficult, and this is not for me, so that it is all.” But this is the time when his friends and deputy director of the institute Tariq sir encouraged him and made him understand, “Be positive and know your strength. He participated in Mains and cracked it also.

After that, the interview phase was before him. He said in an interview on You-Tube that there were only two months remained to prepare it.

Now as an officer he wants to see his hometown Sambhal, which is a most backward district, as one of the top district.

As an officer he also wants to work in the fields of women empowerment, education and health.

His passion is to reduce gender based inequality.

He wants to make sure health for poorest section of the society.

He wants to ban corruption with the participation of public to make transparency.

Sometimes, during preparations, I lost my hope even I cried sometimes, but my family told me to just join the interview and not to worry about result.” So I participated and cracked the interview.

Saifullah wanted since his childhood to become a social activist and his father gave him the Idea to prepare for UPSC exams because the success in this field make his passion a work of life. Also he can help needy and poors by taking place in the officers.

Saifullah Said about his struggle in life when he was in class 11th he faced depression and faced mental health issues. Let tell him by himself his life story:

“You are not going to achieve anything.”
“You should open a general store because you are good for nothing.”
“You are a disgrace to us.”
I was always the victim of above-written lines of few people. Yes, you heard that right. Before throwing light on it let me tell you about myself.
As a kid, I was a strong introvert. I got really afraid of almost talking to anyone. I had a very limited social circle. Overall I was a hugely timid personality. Academically also, I was an average guy. But despite all this life was going smooth.
The nightmare finally started with my admission into Jamia School in IX Class. I felt overwhelmingly homesick and couldn’t adjust. This resulted in 3 years of lavish school loss. I went into severe depression at that time. Everyone lost hope in me. I disconnected myself from everyone. My mind started producing suicidal thoughts. But, gradually, with the help of my family and inbuilt courage I was able to get out of it.
That phase taught me a lot of things. After that, I completely transformed myself. I decided not to look back and started focusing on my career. I came back to Sambhal and took admission here in B.V.M. Sr. Sec. School and performed well academically. I became Head Boy of the school in XII Class. Later, I emerged as a CBSE board school topper.
Life has changed completely until then. Post it, I took admission in Sri Venkateswara College of Delhi University (DU) in the commerce stream. I got exposure to completely new things and learned a lot here. The cosmopolitan culture of the college helped me a lot to improve my personality.
At the end of the College, I got placed in a very good company. But then there were a lot of dilemmas as the offer was genuinely good and I could have financially supported my family. On the other hand, I always had this dream of becoming an IAS officer. Therefore, I finally decided to sacrifice the job to pursue my dream.
Then, I started the preparation of Civil Services along with it I also enrolled myself in Faculty of Law, DU.
Finally, the journey of UPSC started which was another roller coaster ride. Managing two things was never an easy task including the already added mental pressure of Civil Services. But as I had learned from my past experiences, I never lost hope and courage and was adamant to be positive. I tried to sail through this journey with this attitude and became more resilient.
“August 4 2020 – My final results of Civil Services got declared and I secured All INDIA 623rd Rank in the very first attempt.”
This was one of the best days of my life. All the struggles and difficulties proved to be worthy.
“You have made us proud. You are a Star.”
“You are an inspiration to everyone.”
These words were said by the same people who demotivated me in the past
So, I learned from my experiences that always believe in yourself.
“Work hard in silence, let success make the noise.”

Saifullah: Message for All Aspirants of UPSC

face Up and Down of life

Saifullah: Keynotes for All Aspirants of UPSC

This is all about Saifullah Sambhali. Hope you enjoyed his biography. Keep distance, Save life.