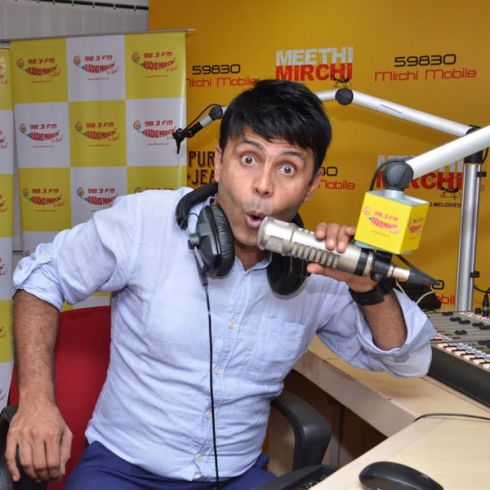 RJ NAVED is a famous radio Jockey ad voice over artist. He is an entertainer. He hosts TV show and radio programs. His most famous show is “DILLI Ka Don” on radio Mirchi 98.3 FM.

There is a lot of information about him and his family and his background.Let’s have a look at his interesting biography in this short article.

He was born in Lucknow Uttar Pradesh. His real name is Naved Siddiqui. He belongs to a Muslim family.He has two sisters.

He was not good in study. He got his education in a government school.

He got married and he has two sons.

He has many hobbies like acting, painting and comedy.

He left his native land and come to Delhi to search the job and he got the job in “customer service representative” in Airtel. When a customer was annoyed about something, the phone used to over handed to him then he would portray 60- years old, and the customer automatically calm down from his work.

Now he starts his journey toward success. He participated in RJ hunt in 2000 in a show which is organized by Radio Mirchi. In this show, Naved got the first rank in 3000 competitive. Since then he started his life in radio Mirchi.

His work: In 2000, he started his job with a night show “Dr love” but soon he moved into an another show which named was “Total Filmi” on radio mirchi.

Since 2007, he started hosting an evening show named “Sunset Samosa which was known as “Bumper To Bumper” for which he won the Best Sparkle Award three times.

He hosted many shows like- MIRCHI MURGA, Sunset Samosa, Dr love, Total filmi and many more.

Over the years he introduced many elements in the show like- kawali, Aunty, Angrez chale gaye dum chhod gaye etc.

With his partners, he usually pranks common public by the call and makes them “Murga” and he gives such contents in his pranks that always being amazing. Whoever listens his pranks, he could not restrict himself to make him laugh.

And even he pranked with bollywood stars like- Twinkle khanna, Vidya Balan and many more. Throughout of this life, he increases the focus of the common people toward himself and he made a place in their hearts.

He began to famous from this way. Now, he is known as RJ Naved by everyone.

But he is not just a comedian, entertainer, Rj, Artist, painter, pranked man, rather he is a teacher who teachs the people by calling from the radio Mirchi FM 98.3.

Sometimes he raised the voice about very very serious issue which are happening around us like- Rape, Eve-teasing, Acid Attack, Discrimination, Religious’s misconception, Political war, starvation and To give Charity.

It’s not so easy as we see. We should have a big courageous to do this, and to make a unique identity in this challenging society where everyone is trying to defeat his competitive as he can.

He is a legend, he is talented, he gave the reasons to the people which are able to think. He makes life easy of the people in this unrelaxed scenario. He gives the reason to make happy to everyone who is upset with his life.

There is a lot up downs in his life that we can’t see but we know very well that he suffered to reach here and still he is  working hard to make himself better and trying to change the thinking of people who don’t think that what are they doing and why, what’s the benefits of their efforts and what’s the side-effect.

We proud that RJ NAVED is an Indian.  He lives in our heart, in our conversation, in our thoughts.