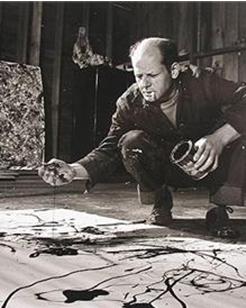 How did Jackson Pollock became so Overrated? The art stratosphere has amplified many artists who revolutionized the face of it while some geniuses remain undiscovered. Similarly, the art industry has also championed artists who came to be called overrated like Jackson Pollock.

As a modern artist, Jackson indulged in heaps of abstract art throughout his life and all of it is unabashedly decorative. Over time, he has become a very conflicted artist regarding whom the art audience seems to have disparate and multifarious opinions.

Some call him a trailblazing force in abstract expressionism while others disregard him as someone who just got lucky. Hence, the question arises—was Jackson Pollock just a fluke artist? Let’s find out in the following section.

The Uprising of Jackson Pollock

Jackson first came in the limelight after his Mural, 1943 for Peggy Guggenheim’s townhouse. The Mural exudes an energetic and rhythmic vibe as the painting seems to move with its wave-like patterns, strewn with an out-of-the-world approach. It was called a masterpiece of abstract expressionism which opened up new possibilities for the art world.

Pollock’s friends claimed that after Penny Guggenheim commissioned this painting, he faced an artist’s block and stared at a blank canvas for days. His friends said he moved frantically in search of a heavenly muse for the canvas but couldn’t find anything in his precious works of conceptual art.

Then, The Mural according to Pollock originated out of a ‘vision’ he had of a frantic stampede scene where every animal of America was just climbing on top of another. As gory as this vision sounds, the Mural looked starkly pleasing with muted tones of warm pastels and shrieking black lines in the middle.

Now, after this painting, Pollock’s name started getting around for establishing the method of placing the canvas on the floor and throwing paint on it. That’s all it took for him to revolutionize the American art scene as he started getting featured in fashion and lifestyle magazines. The Mural caught the eye of the art critic, Clement Greenberg who instantaneously loved it and that’s when Pollock’s career took off.

What Did Other Art Critics Think of Pollock’s Art?

While Greenberg fell for Pollock’s art in mere seconds, many disregard his ‘drip’ technique as random ramblings of scattered paints. According to some critics, Pollock’s art does not seem to invoke any worthwhile, powerful, and raw emotions like other vintage masterpieces. The Mural was made in a night that troubled critics as they felt it was an insult to Van Gogh, Monet, and more art masters who spent years on the same canvas.

Pollock’s artwork has been called effortless in the wrong sense of the world and lacking creativity and integrity while it sold for millions of dollars. Even though Pollock pushed forward the Abstract Expressionist movement, people said his art resembled the messy floor of an artist’s studio. Art critic Robert Hughes even went on to call his artwork, “furious congestion of signs and scribble.”

Clement Greenberg was a tie-salesman-turned-art critic who after just one glance at The Mural became a salesman of Jackson Pollock’s artworks. Greenberg became one of the biggest names in art in the 20th century and he championed Pollock. Greenberg was the one who landed Pollock in LIFE magazine by calling him a revolutionary painter in the U.S.

Greenberg liked the American type of art that Pollock served- full of masculine energy and such swagger! Greenberg went on to publish “American Type Painting” and included Pollock in it by praising his drip technique which makes the art meaningful.

It was clear that such powerful PR got Jackson Pollock into the mainstream. The growing friendship between Pollock and Greenberg benefitted Pollock and his art’s popularity directly. Greenberg was so indulged in Pollock that he seemed to neglect many other artists’ uprising in young America.

Franken Surahler, known for her staining technique which made her paintings utterly surrealist and ethereal, was close with Greenberg. Being a fresh talent, she felt she wasn’t represented properly by Greenberg who didn’t write about her wonderful contributions to art. Like Franken, Greenberg conveniently forgot to represent other forms of diverse artists as well as profusely insightful art movements in his conquest to push Pollock.

Jackson Pollock represented emotions with paints but sans any figurines or symbols and was seem to give new wings to freedom of expression in the art world. While his work is seen as aesthetically pleasing and significantly pioneering in Abstract Expressionism, many still see him as someone who got more credit than he was due.

This is why art critics remain torn in their approach regarding him. But, we sternly believe everyone is subjected to their own opinions after they browse through the masterpieces on https://www.1st-art-gallery.com

Related Tags: How did Jackson Pollock became so Overrated?